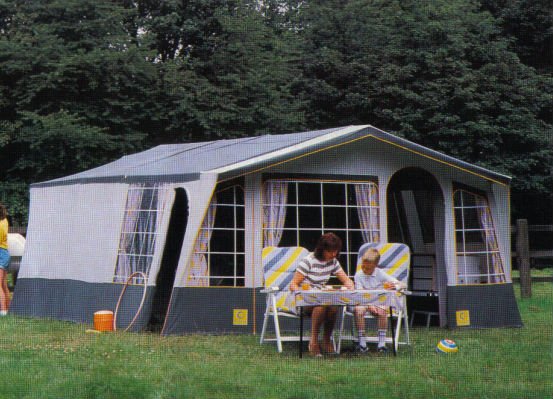 The Camargue was one of the new model range introduced in 1985, and enjoyed a 5 year run, until it was discontinued in 1989.
Where there are more than one set of dimensions shown below, the top figures are for the 1985 - 1987 models, and the lower figures are for the 1988 and 1989 models.
At its launch, the Camargue had a distinctive mustard roof with brick / brown side walls and a peak canopy at the front. it was 440cm wide, and 520cm deep, including both the main and extension awnings. Along with a number of other models in the range, Conway were attempting to provide a totally flexible accommodation solution, with just the trailer for over night stops, the trailer plus small awning, for weekend breaks and the trailer plus both awning components for longer holidays.
The Camargue was at the luxury end of the Conway range, and included their deluxe kitchen, as well as toilet and wardrobe compartments in the main living area. It also included, as standard, integral lockers, with seat cushions, and zipped access to both under bed areas.
The model remained the same in 1986, however, in 1987, the colour scheme changed to two tone grey and yellow. This colour scheme continued into the following year, although the width of the unit was reduced, by 20cm to 420cm.
In the final year of production (1989) the colour scheme changed, once more, to burgundy and grey, but the overall width remained at 420cm.
Included below are links to the five Conway brochures that included the Camargue as well as the specific setup instructions for this model.
Also included is a really comprehensive walk around video of an early 1985 / 86 model. 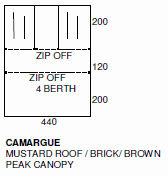 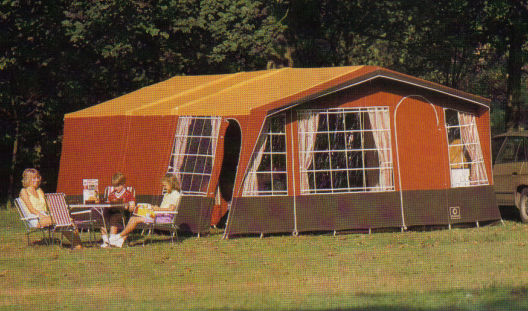 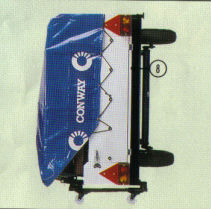 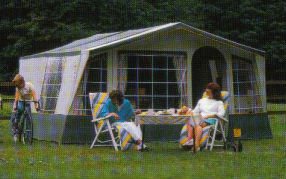