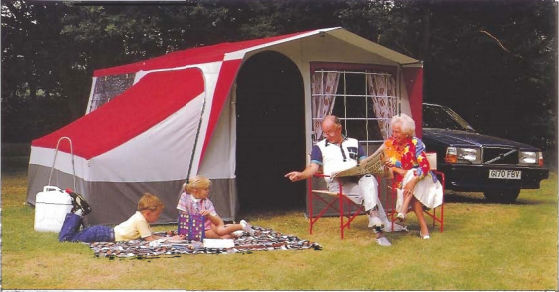 Conway had a habit of using a model name for a brief period, placing it on hold for a few years, then resurrecting the model name, again.

The Calypso was just such a model. Originally launched in 1983, it ran for just a couple of years, before dropping out of the Conway range for almost 10 years, reappearing, again, in 1991. Once again, it ran for two years, until 1992, and disappeared, once again, this time, permanently. The top figures in the 'Dimensions' section below, represent the earlier version of the model, with the lower figures relating to the later model, which was both considerably larger and heavier than its predecessor.

The Calypso was a luxury two berth model, although it did have the option of a two berth under bed tent, best suited for a couple of children. It was originally produced in a brown and orange livery, and was available as the Calypso, or Calypso XL. The XL model included a teak finished dining table, with matching bench seats and storage. It also included padded back rests and a roof liner to the awning area. Each of these was also available, as an optional extra, for the Calypso as well, to bring it up to the same spec as the XL, over time. Both models came with the Conway free standing kitchen.

In 1991, the Calypso reappeared on the scene, however, this time, it was badged as the Calypso Deluxe and now came in burgundy and grey trim. Although the same overall layout as the original Calypso, the Deluxe was larger and heavier than its predecessor. It also came with an optional awning annex, to be used as an extra bedroom or storage space. The Deluxe was a higher level model, along the lines of the older XL, and included such extras as the storage lockers, back rests and roof liner. Like the earlier models, it also came with the Conway kitchen. In addition, built into the chassis was a slide out support, to facilitate the fitting of a fridge storage box.

The 1992 Calypso was identical to the previous year's model, in every way, but the word Deluxe had been dropped from the name. This was the final year of production for the model. Included in the  sections below are the three Conway brochures that included the Calypso as well as the setup instructions for the 1983 and 1984 models.

Berths: Two (Plus two in optional under bed pod)