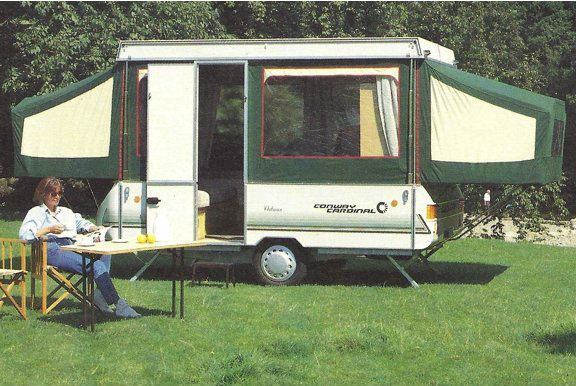 In 1987, production of the hard top models, Laser and Tardis ceased, and they were replaced, in 1988 by the Cardinal and its higher spec sibling, the Cardinal Clubman. The layout of the Cardinal was the same as the later versions of the Tardis it replaced.

These newer models were designed around the newly introduced full perimeter chassis, with new, sleeker designed and moulded front cowl, incorporating the gas and storage locker. As a result of this new front cowling, the roof winding mechanism was now relocated to the rear of the unit.

The Cardinal models offered full width L shaped seating at the front, giving extra seating space over and above a traditional dinette. Behind the dinette was a kitchen, on one side, and a long storage unit / wardrobe on the other. The model also featured two large, slide out, double beds, in addition to the third double, made up from the dinette seating.

The 1988 version of the model was introduced with a burgundy and grey colour scheme, with matching upholstery. This colour scheme was continued, into the 1989 model, also. The Cardinal Clubman also offered velour upholstery, with matching accessories, a three way fridge, 240V electric system, with charger, inner bed tents and a lockable steel security box.

Production of the model, in it's existing format, ceased in 1998, however, the name Clubman continued for another five years, until the eventual demise of the company. It was, however, a much ammended layout, more akin to the Conway Crusader. Indeed, it is probably fair to say that it was, effectively, a hard top version of the Crusader.

The later Clubman is dealt with, separately, in this guide.

Below are the Conway brochures that included the Cardinal as well as the specific setup instructions for this model. 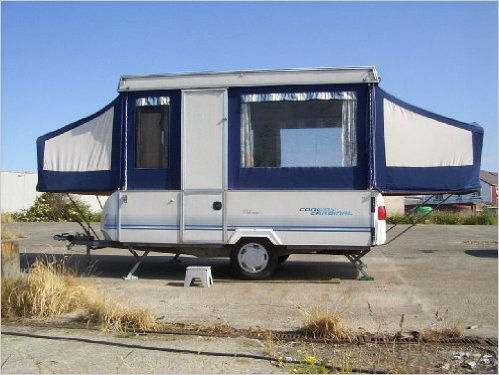