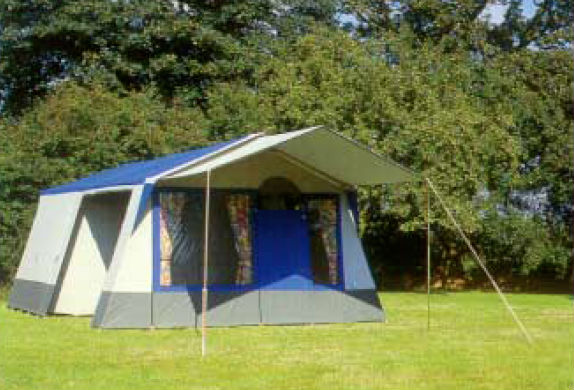 The Clipper first hit the Conway range in 1992, when it was one of the original Conway models to experiment with the use of the cabin canvases made by Cabanon, in France. In the later years, Cabanon were to take over the production of all Conway canvases, and, ultimately, the trailer components, as well.
Like most Conways with a history of more than a couple of years, this model went through a number of changes, both in terms of colour schemes, and dimensions.
The original 1992 version of the model was introduced in the petrol blue and grey canvas, produced by Cabanon. It was aimed at the budget end of the market, and, for the first two year, was only available in the basic 'L' configuration. At 380cm wide, it wasn't the narrowest Conway model of it's time (that honour went to the Calypso) but it was narrower than all other 4 berth model, by 40cm. It was, also, the only model of the range, at that time, to feature the shorter body. At just 200cm, it was 20cm shorter than all other models, including the 2 berth Calypso. The awning was, also, shorter than many, at just 220cm deep. It was aimed, primarily at that section of the market who might, otherwise, have considered a standard frame tent.
By 1993, just a year after its introduction, the new Clipper was, already, a very different animal. The experimental blue and grey Cabanon canvas was gone, to be replaced by a two tone grey canvas by Walker of Holland. The overall dimensions, however, remained the same, as did the budget / entry level model marketing. It also remained a flat fronted model.
1994 saw yet more significant changes. The Cabanon canvas was back, but this time it had a peaked, rather than flat, front, and came in green / grey. The main trailer body was still only 200cm deep, but the awning depth was increased from 220cm to 245cm, and the width from 380cm to 390cm. The other significant change was that the model range was now extended to include the DL model, which was identical to the L, but with the inclusion of the Conway kitchen unit.
Never a model for standing still, 1995 saw another colour change, this time to royal blue and grey, although all other aspects remained the same. This scheme then remained in place for another year, until 1996.
The last change was in 1997, when the colour scheme changed to euro green and grey  a colour scheme that continued until the model ceased in 1998.
Included below are two of the Conway brochures that included the Clipper as well as generic setup instructions and manual for this and other models. We have included the six  brochures (1993 to 1998) that included the Clipper. 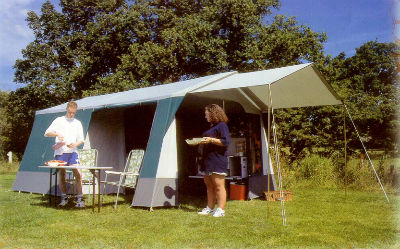