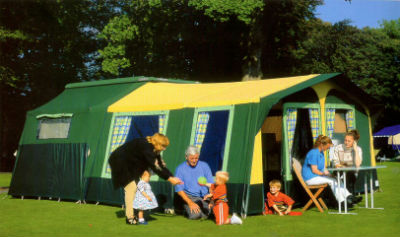 The Conquest was a bit of an annomaly, in that it was nothing like any other Conway trailer tent model. It appears to have been very much an experimental model, with a couple of unique features, and it was subject to one or two changes, in spite of it's production run of just two years.
With the transit cover on, the Conquest looked like any other four berth traditional trailer tent model from the Conway stable, however, once the cover was removed, the first difference soon became apparent. The trailer had a solid lid, which lifted up to become the central roof section of the trailer area. This was lifted up, using a patented gas strut system, as in the four images below, as opposed to the wind up mechanism of the hard top folding camper models. Interestingly, this feature only remained for the first year of production (specifically; 1999). By year two (2000) the hard top roof was gone, and the Conquest was, externally, just like any other traditional trailer tent from the range.
The second departure from the norm, for this model, was that the central cooker / kitchen unit could be used either inside the trailer area (Picture 3) or lifted out and mounted into the main kitchen unit for use in the main awning living area (Picture 4). This is a similar principle to that adopted by the more recent Raclet Quickstop SE, and was a good idea, in principle, however, just like the hard top roof, it appears to have disappeared by the second year of production.
You would certainly have been noticed in a Conquest, with its 'conifer green and ivory' colour scheme. Conifer and canary may have been a little more appropriate, but it was certainly distincitve, and one aspect of the model that remained unchanged.
The basic Conquest was a relatively small model, with an awning area of a fairly generous 450cm width by a much less generous 240cm depth, although depth could be increased by a further 130cm, using the zip in extension annex, to give a very reasonable sized living area. Contrary to its smaller size when set up, it was, actually, one of the larger Conway models, once folded, being both longer and wider (as well as slightly higher) than your average Conway trailer. At 600kg, it was also at the top end, weight wise, for a traditional trailer tent design.
Details of equipment levels, options and extras can be found in the brochures below. We have included both brochures, from 1999 and 2000 respectively.
Also included below are the setup instructions for the Conquest and generic manuals. 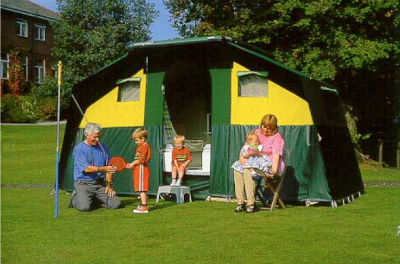 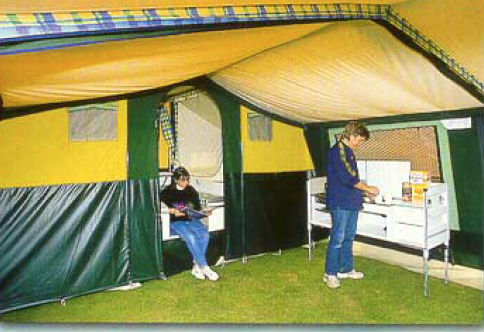 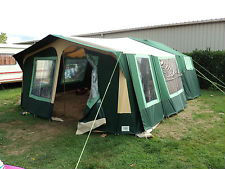 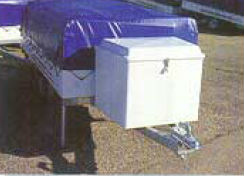 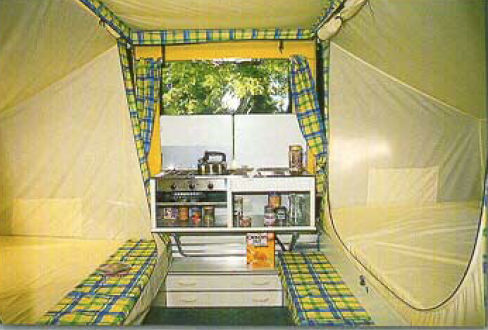 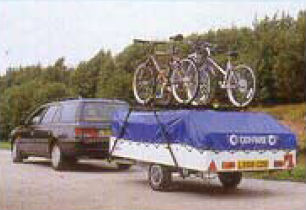 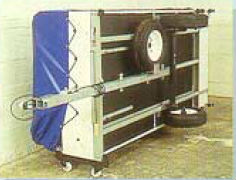 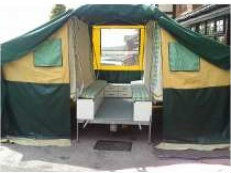 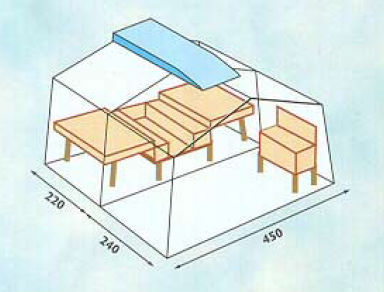