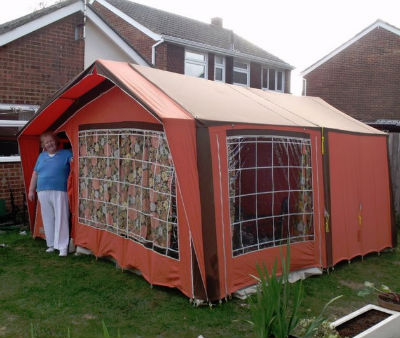 Very little is known about this particular model, except that production ceased in 1978-9. Indeed, the photograph above, of a 1976 Corsica, is the only one we have been able to locate, so far.

Likewise, the Corsica did not show in any of the sales brochures of the time, although we have been able to get hold of a couple of the later sets of setup instructions.

The Corsica was an offset four pole setup trailer tent, available, throughout its life in brown and orange.There was no zip on canopy, as added to later models, so the trailer unit simply zipped directly on to the awning / living area.

Conway Brochures that include the Corsica:  None