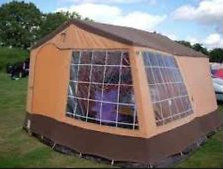 The Conway Crown is another one of those short lived, relatively obscure models with very little available information or pictures.

That said, we have been able to obtain a copy of the the original setup instructions, from 1980, with the kind assistance of the Conway Owners Club.

The Crown was only manufactured in 1980, and was one of the first of the new five pole models. It was a traditional four berth design, and came in two formats; the Crown, and the Crown DL. The latter model had the addition of bench style seating, with additional under seat storage, an uprated interior and the standard Conway kitchen, as featured in the Conway Corniche.

Although not a direct like for like replacement, the Crown was superceded by the Conway Campa (which had, previously, taken a one year break in production) in 1981. The new Campa was, initially, avaliable in the same colours and sepcifications as the Crown, but with the additional 1 metre deep sun canopy, which could be used either to extend the main living area, or to replace it, for very short stopovers.

Conway Brochures that include the Crown: None