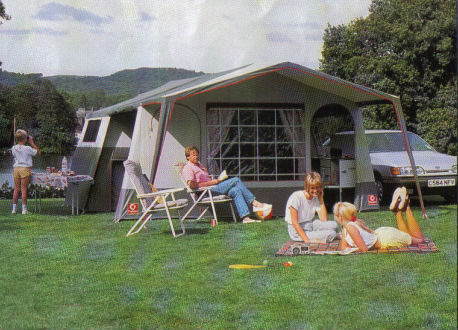 The Conway Euro Challenger was first introduced into the Conway range in 1987. It was released with the distinctive, and, at the time, contemporary colour scheme of two tone grey, with red trim, identical to that of soon to be ceased stable mate, the Conway Corniche.

The 1987 model was a little different from those that came later. It included the standard Conway kitchen unit, but as an optional extra only, and this unit fitted inside the trailer, when travelling. In the first year, there was no optional zip off annex either. The model then disappeared from the range, in 1988, while it received a minor re vamp.

The 1989 Euro Challenger was marketed as a compact yet luxury model, and included, as standard, the Conway Deluxe kitchen, U shaped bench seating, with backrests, lockers, cupboard and table. It also included a large zip on awning, with integral sun canopy and roof liner.

Options included wheeled side storage brackets, so it could be stored on its side, and a four foot central canvas extension, which extended the overall awning size, and incorporated integral toilet and wardrobe compartments. The kitchen unit on the later Euro Challenger, unlike most other Conway models was located on the A frame, at the front of the trailer, as opposed to the more traditional rear mounted arrangement.

With table, seating, and decent storage, this model was well suited to overnight stops, without the use of the main awning, although, of course, the kitchen was not accessible in inclement weather.

The later Euro Challenger awning comes in three stages; the main awning area, which is 240cm x 420cm, the optional zip off annex, which adds a further 120cm to the depth, and the sun canopy on the front, which adds a further 130cm, to give total flexibilty of space, up to a maximum (excluding trailer) of 490cm x 420cm, making it one of the larger models Conway have produced.

Included below, are the three Conway brochures that included the Euro Challenger and some generic Conway setup instructions for this model. 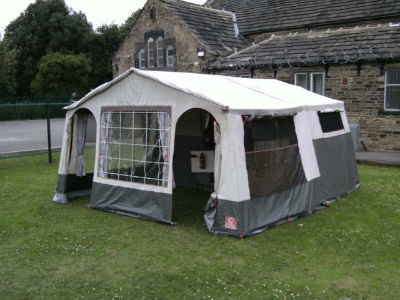 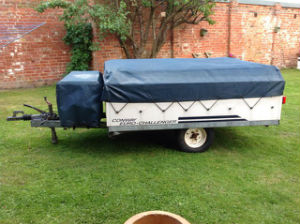 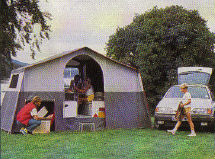 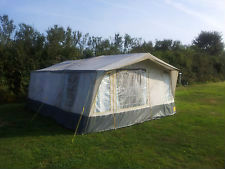