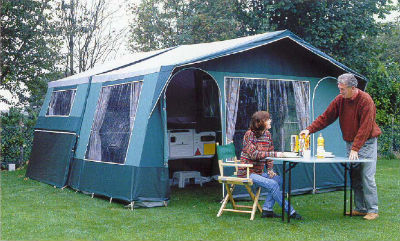 The Conway Excel was a one off hybrid model, somewhere between a trailer tent and a folding camper, and, like many of the 'specials' was only produced for one year (in this case; 1998).

It was designed as an alternative to the Challenger, and the dimensions were very similar, although the Excel had a new, aerodynamic, easy clean plastic body. Like the Challenger, the Excel had two double beds, one of which could be converted to a large settee. Internally, however, that's where the similarities ended. The Excel was designed to give more internal space, and there was no main kitchen unit, like there was in the Challenger. Instead, there was a three way fridge built into the front bulkhead. Opposite the bed settee was a second, fixed, settee, with storage underneath.
To the rear of the trailer were two cupboard / storage units, one of which could act as a mounting for the portable two burner hob and grill (as can be seen in Picture 2). Uniquely, the Excel featured a double rear door, which folded out to give better trailer access, as well as allowing the cooker unit to be used either inside or outside (as in Picture 6).
The Excel could be used as a self contained folding camper, with its own internal cooker, seating and fridge (but, noticeably; no sink or water system) or it could be used more as a traditional trailer tent, with the awning attached. Like many of the other Conway trailer tents, it came with a one metre zip in extension section, which included a ventilated toilet / wardrobe compartment.
Unfortunately, it is more than likely that the lack of a sink / water system will have put off many folding camper enthusiasts, and its appeal to the trailer tent fraternity was not suffiicent to extend its production run beyond the one year mark.
Included in the paperwork section below is the only Conway brochure that included the Excel (1998) as well as the generic manual of the time.
We have, also, included a brief walk around video from a proud new owner, which gives an idea of the interior and exterior of the marque. A rare opportunity, indeed, as these little campers are few and far between, but not without their fans.

Conway Brochures  that include the Excel:  1998 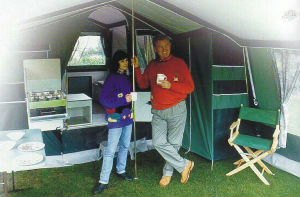 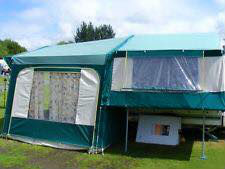